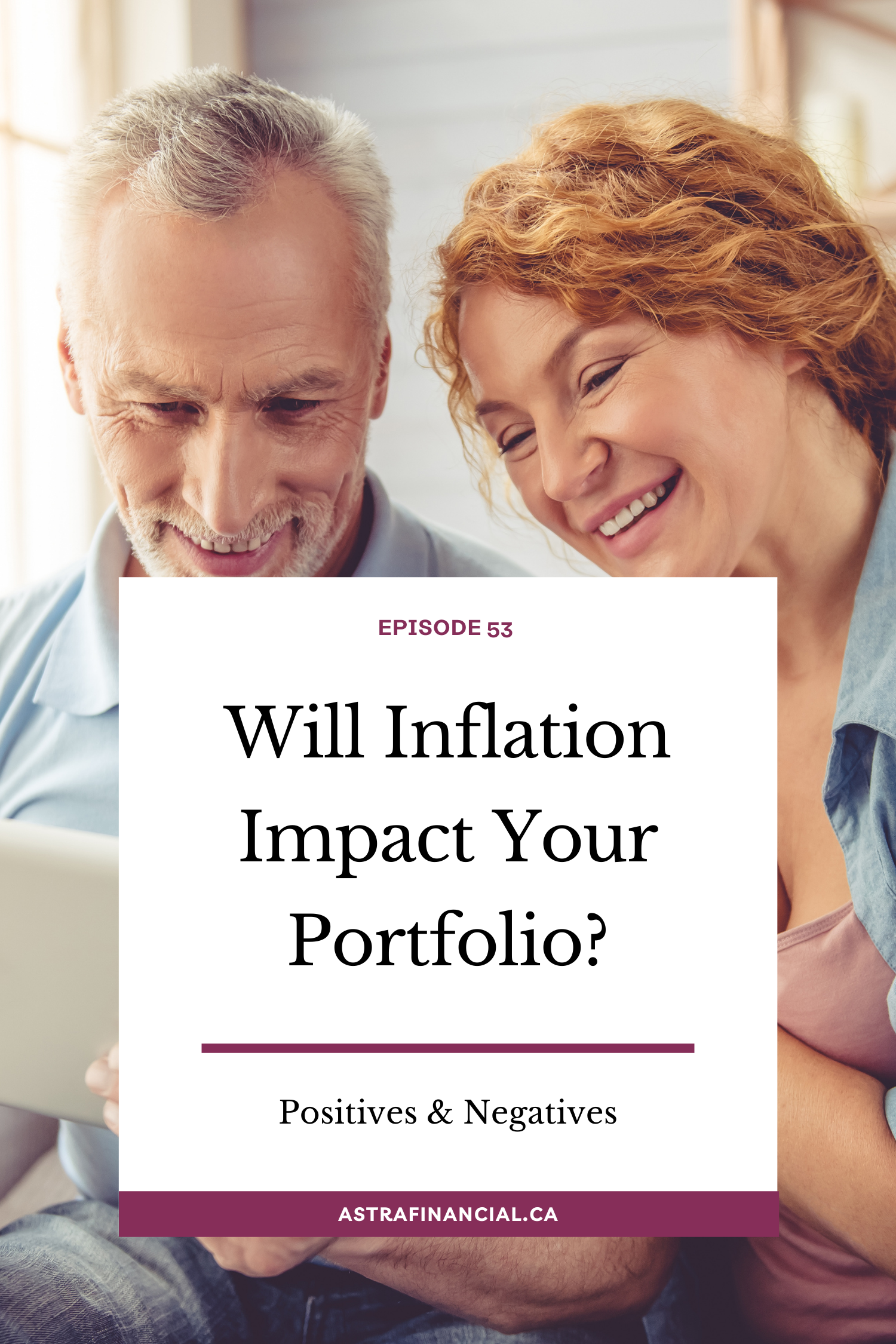 Have you been hearing a lot about inflation but aren’t quite sure what it means? Look no further. This week’s podcast is for you!

This week I’ll be covering everything inflation, including…

Inflation is a sign of the times. It’s not going anywhere (for now), so it’s important you understand it and protect your assets! Listen to Episode 53 here!

Hey there, welcome back. Today I’m going to talk a little bit about inflation. I know you’ve been hearing a lot of that word lately. It’s in the news. It’s on social media. Wherever you look, business updates, economics, you got it, it’s there. To put it simply, inflation is the rising cost of goods and services. You feel it every time you leave the grocery store, you’re filling up with gas, or you go to pay for something. It’s that creeping rising cost.

I’m not an expert on inflation, but it is something I have to keep track of and consider in financial planning. I know that there’s a couple of reasons that inflation happens. There’s demand and production costs, and right now, there’s a few things boosting that, and it’s definitely the supply chain problems that we’ve got with COVID. Factories and manufacturing were slowed down in parts of the world, mainly China, and that is causing some of the increased costs and waiting on things.

We’ve all been affected by that. I know somebody that’s waiting on a truck, wants to buy the new truck – the vehicles are in shortage. They’re waiting on a chip, the technology part. I’m waiting on two bar stools for my table that I ordered months and months ago. I’m just assuming that factory wherever they were being made or some of the metal for it, you name it, I have no idea, but there’s a shortage. I’m waiting on – it would’ve been last year – plastic signage to put in the hallway to our office, and I finally gave up because nobody had enough plastic. And I’m not talking about a big piece here. I guess maybe I need to try that again and see if there’s someone who has some scrap plastic they can throw our logo on. So if there’s anybody out there listening right now that owns a signage company, please message me.

I guess what I’m trying to say is that it’s hard to find things right now. We’re waiting longer, and the cost is a lot more there. That is inflation. There are winners, and there’s definitely probably more losers in inflation. The first thing that comes to mind for what would be defined as a loser in inflation, that’s being the most affected by rising costs and carrying a lot of debt. And those are people on a fixed income that doesn’t rise with inflation, and so that could be lower income.

I’m also thinking of retirees on a fixed income. Now bonus for us here in Canada is that receiving your CPP, which is a Canadian Pension Plan, and your old age security, it does get an increase with inflation. They call it the CPI, the Consumer Price Index, and it does rise. Others with GICs, which is that guaranteed income certificate or those just holding on to cash, or those with a very small pension amount, maybe there’s a defined benefit pension that does not increase with inflation. You’re going to be the hardest hit. Fixed income, lower-income employees with no paying increases will feel the strain the most. Especially if your pay is not increasing, but your bills are.

I’m going to add another loser here. And this kind of applies to talking about how this affects inflation affects your portfolio or your investments. Think about this one. This is a loser, companies on the stock market that are extremely leveraged with no money in the bank. So, their debt interest rate will increase, and loan payments will get more expensive because interest rates will rise. So, I anticipate there’ll be some loser stock picks out there coming up. The growth of those companies is going to be poor. If you don’t have cash in the bank, you’ve heard me say it before cash is queen, and you’ve got higher interest payments, and you’re not able to pick up your growth in your company, you’re going to be hit hard.

This is when finding high-quality investment choices that have been scrutinized, analyzed, researched, I mean, you name it – actually doing the homework. The financial health of a company to whether inflation is vital to you receiving your rates or returns. My personal opinion is that DYIers, so that’s, do-it-yourself-investors that are picking random stock picks, are going to feel the hit in a year or two when they’ve hit some of those losers. That didn’t have cash in the bank, that were over-leveraged, borrowed money, maybe it was a new startup or just new. Doesn’t matter. They’re going to be hit hard.

Okay. There are some winners. I know it’s hard because it’s doom and gloom. We hear that on the news right now. Don’t forget. The media is sensationalizing things. It also needs to have coverage. They’ve got to show some blood and glory there in the news, and inflation is one of those things. The winners, so there are some winners. Stockholders get some protection from inflation because the same factors that raise the price of those goods also raise the values of the companies. What I’m saying is that there are good companies out there with cash in the bank that can weather the storm of inflation.

And in fact, people still need, want, and are willing to pay for what they offer. Meanwhile, companies can raise prices to shelter their profitability from inflation. So if it’s a company that’s strong and people are still willing to pay money, they’re going to pay even with inflation. But some firms have thinner profit margins. Thinking of retail and food and restaurants, I mean, those are tight. Or companies in extreme debt, like I mentioned. So, there are some companies that are going to be able to weather the storm and come out ahead because they can raise their prices.

I want to point out that there are differences today between today’s inflation and the last inflation spike of the late seventies and early eighties that’s hitting the news. But they’re not the same. It’s not identical. Yes, the definition of inflation is the same, but these are two different scenarios. Population growth is one. We do not have the same population rising. That, in turn, demands more goods and services, putting a larger strain on inflation. Today population growth is low.

Another difference is global trade does not match that of the late seventies and eighties. And the increase in oil prices has not spiked anywhere as high in comparison to the late seventies. There are differences, and this is a different world. The supply chain is starting to ease a bit, and it might take a little bit of time to heal through this, but gradual improvement is expected. So there is a difference.

Okay. So the question is, will inflation impact your portfolio? Right now, fear of rising interest rates, fear of inflation, fear of more pandemic waves and shutdowns, and geopolitical fears, like a Russian war, is giving us volatility. It’s the ups and downs in the market. It’s a little bit of whiplash right now. You know, you check, and you’re up 200 points, and then down 150 points. It’s going up and down. But is it just inflation? Is it just inflation impacting the markets? No, it’s a fear of all those things that I just mentioned.

If you’re invested in high-quality companies, and you’re diversified – and that’s important because you really got to scrutinize the company, and you’ve got to be in different sectors and different allocations – your portfolio will be okay. But if you have random, low-quality, unknown, and not researched companies, meaning, no one’s done the homework behind the scenes and checked the books, and make sure there’s still room for growth here, and they’re paying dividends, and they don’t have a lot of debt. Then you might have a problem that creeps up, and that will be underperformance.

Households right now will need to check cash flow to support that future demand of rising costs. Additionally, as the economy more fully reopens, spending will rotate away from certain goods where the demand has been concentrated. While supply chains may take time to heal, gradual improvement is expected. This is not the same as the late seventies and eighties that lasted longer. Rising Canada’s interest rate is expected, and it’s a way to try and help inflation.

So, my takeaway, inflation will level out here eventually. But as usual, my message doesn’t change. Keep your debt levels low and affordable. Never max out to the top of your mortgage. When purchasing a house, give yourself that wiggle room and room for interest rates to rise, utilities get more expensive, and property taxes will always rise. Those with lower debt will manage inflation better.

Next is, you have to be investing. Find those high-quality investment products that are managed extremely well and be diversified. There are smart investment choices that will not be broken because of inflation. Remember, I explained there are still some winners in inflation, and if you’re not invested, then it’ll be really hard to have your cash keep up with the rise in costs each year. You’ll run out of money faster than you can imagine because every year, things get expensive. I always say, you know, when you leave the grocery store and you’re carrying two small bags of groceries, and you just spent a hundred dollars, well, that’s going to be compounded every year. Tune out the noise. Look after your own financial house and just keep on saving.

That’s it for today. Send me a note if you want to talk more, [email protected]