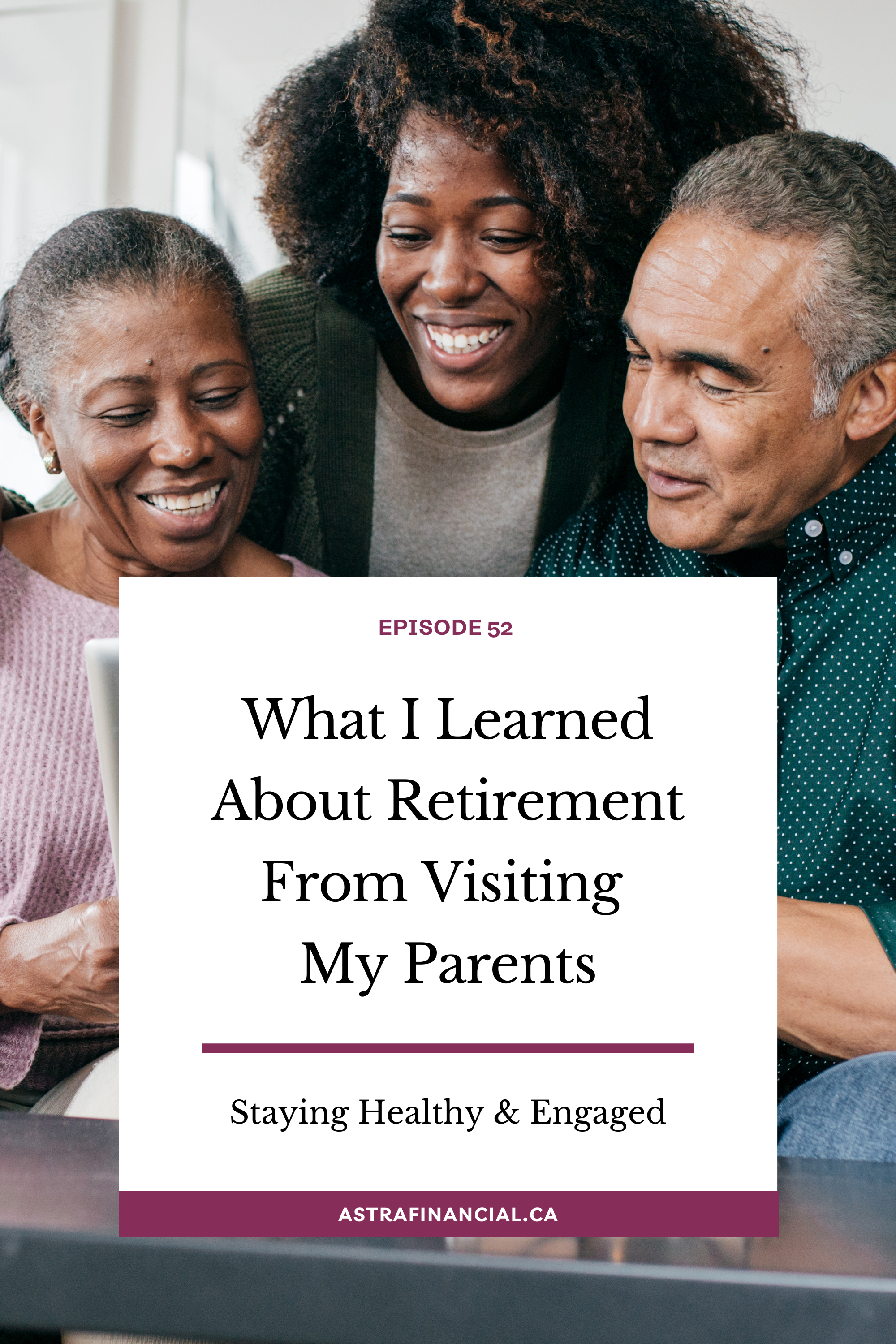 Do you have a long retirement bucket list? Maintaining a healthy body and brain going into retirement may allow you to tick more of those boxes!

Naturally, our bodies slow down as we age, which is why we want to keep our health in check – so we can do MORE during retirement.

Join me for this week’s podcast, where I talk about the stages of retirement and valuable lessons learned from my parents!

Hey there, welcome back! This episode, I thought I’d share that I made the decision to visit my parents and fly to Mexico end of 2021.

It was during the fourth or fifth wave. But it was a personal decision. I kind of rolled the dice. Had made all the plans necessary in case I tested positive and had to come back late. You know, I’ve done an episode on travel plans, and I followed all of the advice I’ve given. I walked the talk. And my decision was because I hadn’t seen my parents. I hadn’t seen my mom for some time. And as an only child, there was some heartache during the pandemic and not being able to see each other. And there was a bit of a need.

It was a great visit. It worked out really, really well. And, yeah, I did test positive, but I only panicked for about half an hour when I was trying to change my flight. I made 80 bucks changing my flight, and at the office, things were running smooth. Thank goodness for being surrounded by wonderful coworkers. Things were okay. And I thought, “Oh, I made 80 bucks, good sign! I’m going to stay longer.”

Now, they’re in their seventies, and they live in Mexico for most of the year and return to the west coast for the summer months. So, if I want to see them, I have to travel. I always have these large gaps in between seeing them. And you know when you haven’t seen someone for so long, and you realize, if they’re kids, you’re like, wow, they grew really fast. And then you think about it, well, I haven’t seen you for six or seven months.

Well, after not seeing my parents for a while, it made me realize that there are some differences in the last few years, the biggest being that they’re getting older. They’re aging – don’t kill me, mom, if you’re listening. Now, I’m not being cheeky because they tell me the same thing. Apparently, I’m getting older too.

When I first saw them, it became apparent that they were older. You know, having to talk a lot louder. The TV’s a lot louder. My mom’s hair is a hundred percent gray now. It’s beautiful. I love it. It’s weird because it feels like they just retired. I’m stuck in a bit of a time warp. And if someone asks me how long they’ve been retired, I’m like, well, not that long. But then I do the math, and it’s like, wow, I lose track of time.

Then it’s these other little things like shouting to communicate or the gray hair that make me realize they are older, and there has been some time, and time is precious. They’ve slowed down now. My dad still goes twice a week with his buddies motorbiking in the mountains of Mexico – that gives me a heart attack, but he’s a great rider. Good bunch of guys. But the difference is, he’s recovering from a long ride every day in between. He’s a little stiff and naps after. I don’t know if he’ll admit that. These are things I don’t remember before.

I realize that there are stages of retirement. I’ve never witnessed it and thought of it through my parents before, just maybe through the office and a spreadsheet kind of way.

The early stage of retirement is the early years, where the days are so busy and jam-packed with events and activities. This stage doesn’t feel all that different from pre-retirement because spending is the same. Just as busy, if not busier and physically feel the same. This is where, in talking to retirees that just retired, they’re like my calendar’s even more full than when I was working. This is the exciting time to do all the activities and travelling you have wanted to do in retirement. This is the stuff we plan for.

The next stage is the slowing down stage. This is the body telling you to slow down a little bit. Rest more. Days are not as full of activities as before. My mom joked when I visited that one activity a day was enough. If it’s going to the market for food or laundry or a chore – she only wants one of those things a day. I actually liked that pace. It was really relaxing for me to decompress.

Now, I did have to wake up earlier and go for a run and then I worked a few hours on the computer every morning to appreciate their slower pace. But, oh okay, that’s a sign, you’ll be happy to know. I guess I’m not ready for retirement yet. That stage is kind of like what my mom said, where you plan activities. She’s still putting in her steps. She’s got her Fitbit still walking. The center is around one activity a day, and the rest can be for reading or, you know, cooking taking it easy.

Now the stage after this gets even slower. Sometimes the mental and physical part of this retirement is affected. And often, this stage might require special support from family or care agencies. We all know somebody, or we are somebody that’s had to look after aging parents with those physical helps as well, and maybe even stepping in with mental capacity.

In terms of spending, what I wanted to share is the middle stage, and the last stage of retirement might be the one that has some decreased spending. Statistics show that spending starts to decrease the older you get. And I do see in the office by about 75, you know, spending a lot less, then the cash buildup in the bank account, the sweet spot gets bigger and bigger. There’s just really not a lot of things to spend on.

My takeaway for today is this. Keep your body and brain as active as possible. Consider before retirement finding an active lifestyle to help you keep the first stage of retirement as long as possible. Take care of your physical and mental health. Think of it as training for retirement.

My other takeaway is that because you are training for this healthy retirement in that early stage and a longer active stage of retirement, do the financial planning to make sure you can maintain that spending lifestyle you want during your active years. We’re living longer. We’re staying active longer. So plan for it.

That’s it for today. Happy planning, and we’ll chat next week.