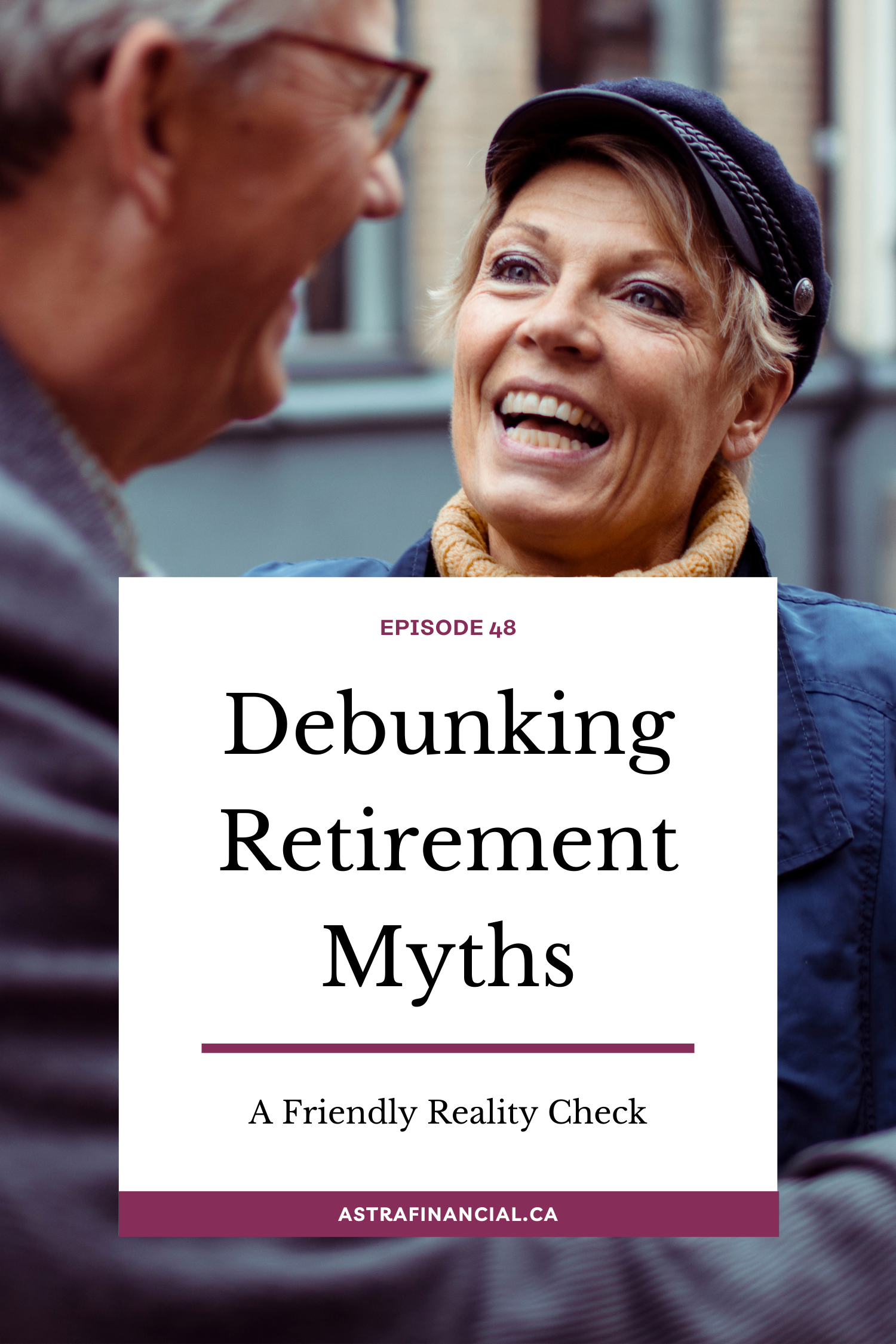 Are you tired of hearing retirement myths all the time?! Me too!

“You should retire at this age.”
“Make sure you’ve saved this much money.”

Forget about what he said, she said, and let me do the debunking for you! I’ve compiled the most common retirement myths I’ve heard, and I’m ready to clear up the confusion.

Hey there, and welcome to another round of our Heart of Money talks. This is episode 48, hard to believe it is 2022. That means this podcast is just a wee bit over a year old. Oh, I can’t believe I always find something to talk about. Thank you for not falling asleep out there.

Today, I’m going to share a few things that I hear around the office, I read about in the paper, and I want to debunk them a little bit and get you thinking just to keep you on the straight and narrow during your planning.

So I’m going to share with you a couple of those things that I hear. Okay. First one, “I only need 70% of my current income.” That’s a statement that I’ve seen in the paper, I have heard in my office, asking, “so I only need 70%?”

Now, here’s the answer to that and why I think I need to debunk that. We have no idea if that is true. I hear it. I read it in the media, but how the heck do you know if that applies to you personally? That is a random percent, a random number.

Now, I know there’s a kind of, some rule of thumb thought there, but you are an individual, different than the other millions of people out there. The same as this statement, the other one that I hear is, and I’ve read this, “I only need $1 million to retire, or I need a million dollars to retire so that, you know, that’s the goal.”

How on God’s green earth? Do you know if that is true? How does that even apply to you? We have to look at a lot of things. Your lifestyle is different than my lifestyle. We have different needs. What are your current spending habits? What is your current lifestyle? Let’s go for that, and then let’s subtract your mortgage, assuming you’re going to be mortgage-free later on when you’re done working.

Add in some of those must-do’s in retirement, like maybe travel or a reno, or you know that you’re going to have to buy another vehicle. You know, there’s a whole bunch of things to think about here. Now, account for your taxes, owing, and retirement.

This is where we start. We work backwards from that, and then we come up with what you need. If you don’t do the planning work, then how do you know? Those are just random shots in the dark numbers. And that might be a great goal when you’re maybe just starting out like think, you know, your twenties or thirties, and you’re just starting that savings, then you might be like, “okay, I just need to get to a million.”

That’ll get you through until you find a financial planner, until you find someone that can help steer and lay out a path for you. Great. But, don’t just go on that rule of thumb and then retire, assuming, “Okay. I’ve done it, a guesstimation 70%. Okay, good.” No, you need to put in some work.

Okay, next thing that I hear, here’s the statement, “Finally, I’m going to have time for all the things I’ve been putting off.” Okay, reality check. Most retirees I’ve seen in the first few years are so busy. They are way busier than they have ever been.

If you are waiting to take up tennis or learn something, it will not miraculously get done or have time because you are going to be trying to maintain your social network because right after retirement, you’re going to want to maintain those relationships, those friendships, you’re still going to be going out.

You’re going to probably have some family obligations. I’ve just seen so many people busier than they have ever imagined. Side note though, the definition of busy is very subjective, and our prior to change from what I’ve seen in retirement is that busy is because I’m moving just a little bit longer in the morning and having, you know, I’m enjoying my cup of coffee, but you have to count for that. Things will slow down, but things will get super filled for you. So if you’ve been putting off all those things, they might not be getting done later anyway.

I had this podcast, it was at the end of last year, so the end of 2021, and it was living your best life with Bryce in retirement today. I interviewed him. He moved to Fernie. And they are living the dream life, doing every activity you can imagine. They’re my goals.

Now, I can’t remember if it was during the podcast or if it was offline when we were talking, and he said, “If you’re not active in doing these things already, but you decided to move to Fernie, and you retire there, and then you’re going to take up these activities. It’s probably not going to stick.”

And I, that was a light bulb moment for me, and I completely agree with him. Is that if you don’t find the time to do it before retirement, that habit or that thing that you’ve always wanted to do, it probably won’t stick because you’re going to have a full life. You’re going to have other things to do. Don’t wait until retirement to do these things. Do it now.

Okay. So the other thing I hear a lot, so the next thing I want to debunk for you is that statement that I’ve heard, “Oh, but I’ll spend less in retirement.” Oh, boy, I hate to tell you, with inflation and upkeep that keeps going up thinking that you can cut your spending drastically just to convince yourself you can retire. That is not going to work.

You’re going to upkeep those relationships. You’re still going out, and that means spending like you did before. It just, maybe it’s on different things, but you’re staying busy, and I don’t think that cutting your spending habits is a realistic thing in retirement. The goal is, when doing all your financial planning, that you have the same lifestyle.

Now that doesn’t mean that, in the later years of retirement, so what I see in late seventies and eighties is that yes, that’s true spending does become less. But in these first few years in the beginning of your retirement, that is just a myth, that all of a sudden, you’re just going to start spending less.

All right. Last one. This one, this one’s sparked because I was talking with a girlfriend, the statement of, “I’m 65, I guess I’m supposed to retire,  I have to retire.” Ooh, okay, that gets my blood boiling a little bit. Now let me tell you something, 65 is the new 55. And so, what sparked this is I was talking with my girlfriend, and I asked her what her inside age was, I think she said around 26.

Oh, that is goal-worthy. I wish. I want to be that. Now my inside age is in my thirties. And so the point being, we all have an inside age, and it’s younger than what we have. When I’m 65, I’m curious is my inside age still going to be in my thirties? You know what, probably.

My mom always says, “I look in the mirror, and I’m like, who is this woman? That is not who I am day-to-day.” So she, I think she thinks she avoids the mirror because inside, she is that young person as well, not that woman in her seventies. Although she says, she’ll take the wisdom. So shout out there to mom. I think that because we’re going to feel younger, we don’t need to have this outside age number that tells us that we have to retire.

If you love what you do, you’re going to be healthy. You’re taking care of yourself, you’re going to want to work longer if you find passion. That is a retirement myth that needs to be debunked, and it is every day by people. There are people working past 65, and they are living their best life.

They’re healthy, there’s a sense of purpose, they have so much knowledge that is irreplaceable and, you know, go beyond that. If you do planning and you decide, okay, show me the math to show if I can retire at 60 or 65. Great. But that doesn’t mean you have to if you don’t want to. You keep doing what brings joy to you. And that is going to be, not a number on the outside age, that’s going to be your inside age.

Okay, that’s it, a few things for you to ponder on your path. There, a few things to think about on your way to planning your retirement. Until next week.