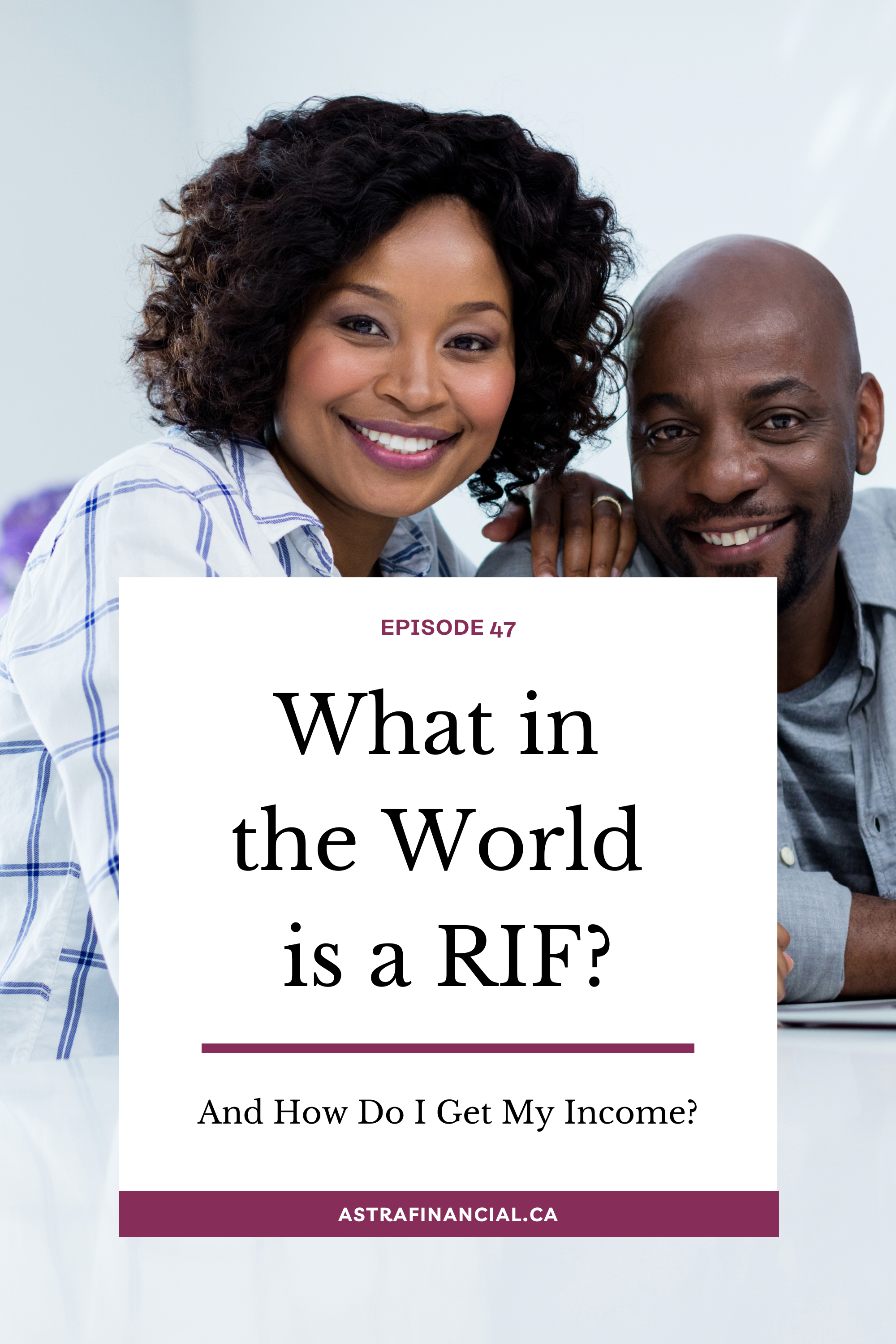 If you’re working on your retirement fund, there are a few things you should know about RIFs, or retirement income funds. New term? Don’t worry!

Listen to Episode 47 of Your Heart of Money Podcast where I go over:

Hey there. Welcome back. Today, I will answer this question: What in the world is a RIF, and how do I get my retirement income payments each month? Okay. Let’s rewind. You’ve been saving in your RSPs for 20, maybe 30 years. And now you want to know how this retirement thing works. This is one of the most common questions I get from people starting retirement planning, and maybe they’re a few months away from finally drawing from their investments. They want to understand how to turn on the tap of income. I’m going to share some of the details of how it works.

So you’re going to have to turn your RSP into a retirement income fund. We use the term RIF. So anytime you hear that term RIF, that’s what we’re talking about. In order to turn on the tap and pay yourself, you have to move the RSP bucket into a RIF. You can keep all the same investments, and you can put anything you like in the RIF. Essentially, you’re just changing the name of the bucket. It is no longer in an RSP, but now it’s called that retirement income fund.

So once it is that retirement income bucket, and honest to goodness, all it is truly a piece of paper. And now, all of a sudden, it has turned into a RIF. RSP to RIF, but there are details on the form that make it official, but you just sign it. Then you can start drawing your planned income from there. Okay.

One misconception that I hear all the time is that you’ll have to make your own tax installments now.

Yeah, that sounds daunting and awful that you’re going to have to keep track and make payments to CRA. That’s not true from a retirement income fund; the taxes are automatically taken off and submitted to CRA on your behalf before it lands in your bank. So by the time you get it and it lands in your bank account, that tax has already been sent off.

You’re getting the net amount in your pocket. It is after the tax. CRA dictates the tax per cent minimum that has to be deducted. And this is where a certified financial planner comes in and is important because they make the tax projections for you.
This is what’s having us extremely busy right now in our office and being the nerd. Of course, I love it, but we’re looking at the financial plans and that projection, and it tells me right now whether or not you have the right amount deducted because we’ve mapped this.

So here’s a tax tip for you.

You never want too much tax deducted from your RIF investments. So what I mean by that is that you don’t want to have extra. Just to get a refund at tax time because that means you’re actually selling more of your investments than needed. And that then means the longevity of the account is affected because you’re selling more than you need to.
And it also means that you’re losing compound and growth by selling above and beyond what you actually need. So the key is to balance out all of your other sources of income. So if that CPP and OAS, and to have tax taken off as well of those things, that is part of the projections that I do.

And they’re asking for above and beyond what they need, like 35 or 40%. That is just you shooting yourself in the foot because it means you’re selling investments sooner than you need to. You’re depleting the account just to make up tax, and those other places are the better place because it means you’ll end up taking less out of your investments gross because now you’re getting tax taken off, and I’ve sat there, and I’ve done the calculations and the scenarios, and it’s just, it’s such a saving in the end for you.
That tax tip is to take a look at all your sources of income, get tax taken off other places, especially CPP and OAS, because really they’re going to send it to you and then they’re just going to want you to turn around and pay the tax.

So you might as well tell CRA to keep a little bit in their pocket before they send you the CPP anyway. It will help mitigate how much of your investment you have to withdraw each month because he can reduce that gross amount you need.

Next, let’s talk about if you did not need retirement income from your investments for a while and you’ve planned other income sources. So maybe you’re taking out of your non-registered investments, your tax-free savings accounts, have a defined benefit pension that life annuity that’s paid monthly. Or maybe if you own a company, you’re taking dividends out of that corporation that you own, you need to know that you have to turn that RSP into a retirement income fund by the end of your 71st year.

So at 72, you’ve got to start planning to take out money. Out of your registered investments and the government, for example, they have a required minimum amount that they make you take out. And for example, right now, it’s about 5.3% of your RSP balance at age 71.

So when I complete those financial plans that map out retirement income, this is important. And I have to know this because we want to make sure we plan out what buckets to start taking from based on knowing what that minimum amount will look like. Here’s an example, if you have too much registered savings and you wait until 72 to start taking income, you might be forced to take income that is higher than your working years or high enough that you’ll be paying a lot of unplanned, extra tax on that.

Imagine if you have one, let’s say you have $2 million a year in your registered accounts, you turned 72, and you’ve waited until 72 to take it out. You are now required to take out almost a hundred thousand dollars of that at age 72. Okay. That’s a high tax bracket. So we need to know this because sometimes it’s in your best interest to start taking some money out before age 72, even out that income over the long term and therefore paying less tax keeps you in a lower tax bracket by starting it.

This is definitely part of the planning process, and you won’t know this without mapping it out. So this is just one of those things we look at. And knowing that by age 72, your RSP has to roll over, maybe do some planning and seeing, should we be doing that a little bit sooner? How much should it be? Should I be taking based on everything?

One other thing to consider is the investment allocation – what and how you decide to invest in your RSP. That will need to change when you start drawing income out of your registered investments. You’re going to want to look at that allocation. A piece of your portfolio to be in low risk, fixed income funds that when you pay yourself your income each month in retirement, it’s without the rule of coaster, ups and downs of the market, you know, back March 20, 2020.

It’s so funny with COVID that it feels like it was five, ten years ago or was it just yesterday? It’s such a bizarre concept to think about that. It’s like we’ve lost a year and a half, but the markets were super low in March 2020. Maybe it was -15%, 20% depends on your equity, what you invested in, but there was a downturn in which retirees still need their income.

It would help if you still took out of your investments each month because you still have bills that need to be paid. So we still had to withdraw. Even when the market was low, so instead of drawing from an investment that was at a negative return, we were able to take from a spot that was low-risk fixed income without the loss kind of flat, the rest of the account can recover because you’re letting it sit there.

You’re not selling, so you can let it bounce back, and it bounced back pretty fast and COVID, but you know, they were looking at double digits now. So by just letting it sit there and recover, you’re going to make it back. You only really lose when you have to sell. And so the idea is to make sure you have a piece of that pie, the piece in your bucket that is going to be low-risk fixed income.

That is where you’re going to start taking your monthly income from, which is why you have to change your allocation in retirement. You’re going to want to make sure you have a defensive spot and can withstand when you know what; hit’s the fan because it’s not a matter of if it’s just when, and we need to plan that defence.

So to recap, your RSP turns its name into a retirement income fund, and you can start drawing income from any time right up until the end of your 71st year. The government then will make you take it out. There is a minimum amount that the government makes you take out, and that should be planned for.

And the tax calculations projected ahead of time by your planner, having someone manage those tax calculations, includes all your income from all different sources. It takes that guesswork out for you. Then that tax you need to know is automatically taken off and submitted to CRA. So you don’t have to make any remittances yourself manually.
That’s it. It’s easy peasy. I explained this process. I feel like it’s a daily routine process that I described in our office, and I get excited to share because it’s not complicated. It’s so easy. You get to pick the date. You want it deposited into your bank account. Voila, your paycheck is yours. I love explaining this.

It’s so easy. That’s it for today if you have any questions, Send me a note at [email protected] Take care.