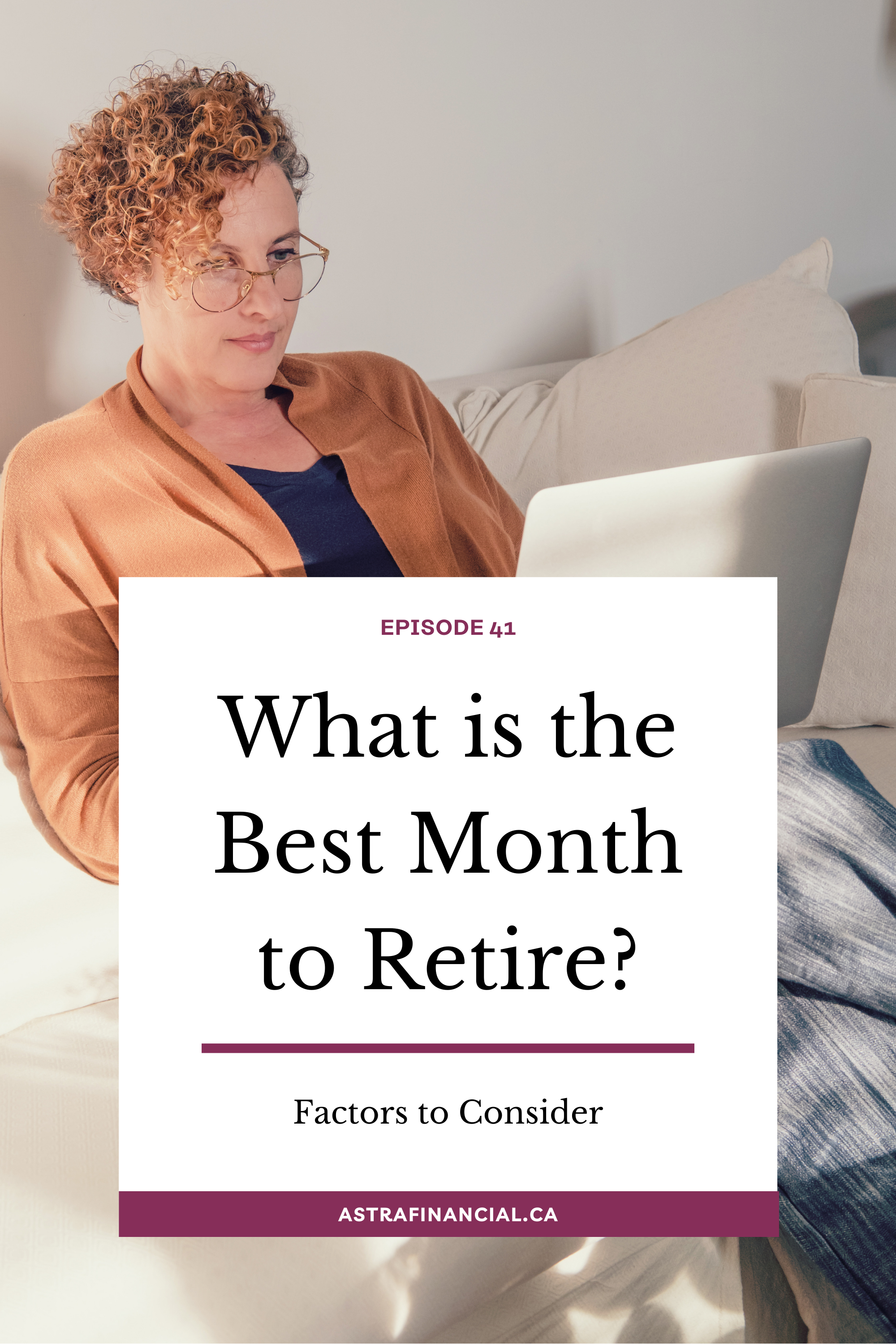 We all think about what age and year we will retire, but have you given some thought to what month of that year will give you the most bang for your buck?

Think about it. What time of year do you…

Get your annual bonuses?
Have a fiscal year-end?
Want to spend time away from work so you can enjoy travelling during winter or spending summer in your backyard?

These factors and more all play a role in finding the ideal month for you to retire so you are set up for success 💃 It’s not the same for everyone and there’s lots to consider. So take it seriously!

Ready to think about your best month to retire? Listen to my latest podcast here >>

Hey there and welcome to episode 41. Today, I’m going to ask a question that I’ve been asked and that is, what is the best month to retire? This answer is going to be different for everyone. So I really just want to go through a couple of examples that you might want to think about, see if any apply to you and go from there.

Okay, so the best months to retire – that depends. Here’s an example – if you have a bonus that is paid out at the end of year, which is common for a lot of people, I think you’ll probably want that bonus and you’re going to want to wait until you get paid that bonus. That’s extra money that you deserve. You worked your butt off for it. For example, the end of the year – a common one for fiscal is April or May, but whenever that is, you’re probably going to want to stick around and get that bonus. That’s going to dictate what is the best month for you.

Another one is a retiring allowance. A retiring allowance is a lump sum. It’s taxable. You’re going to want to plan around your taxes. For example, should you wait until January of the next year to retire? Because you’ll only have that first month of the year, your income might be less for the rest of the year and that additional lump sum of retirement allowance won’t put you at a high tax rate. Whereas, if you retired at the end of the year, you’re going to have a full year of income. Then on top of that, this big retiring allowance is a bonus lump sum, so you might be in a high tax bracket. That’s something to think about.

Here’s another example that you might want to think about is if you have a defined benefit pension. That’s the type of pension that is a life annuity paid every month. You might want to wait until you hit the work-year anniversary that gives you the full pension, without a reduction. That defined benefit pension has a formula and it’s usually based on your age, your years of service and your income, and then, they throw in, I’ve seen 1%, 1.5 or 2% of about in there, in that formula.

You’re going to want to consider that and see where it puts you, meaning that if you haven’t quite got those years of service and age, then you might want to wait a little bit and see until that work anniversary comes up. The pension department can give you a few projections and for sure your statement is going to have some info. It’s going to have your years of service, and then it’s going to show you what to expect, and then it’ll show you reduced. So you really want to wait until that work anniversary that bumps you up into that next year. That could literally be just waiting a couple of months until you’ve got that full service, so that’s something there.

Now, another one, and this is quite a common conversation in our office, is those darn vacation days. If you think about it, you’re retiring after many years of work, you’ve probably climbed up the ladder, you’ve got seniority. You might be at a place where you’re getting five or six weeks of vacation days coming to you every year. That’s going to possibly play into your timing. So for certain government organizations, new vacation days are allocated in their fiscal year and that’s usually April when they’re handed out.

I talk to a lot of people and they say, “For my next set of five or six-week vacations to come, I’ll take those days and then take the summer off, paid with benefits as a vacation, and then have the official retirement begin once I’ve used them all up.”

So during that time you’re not actually retired, you’re just using all your vacation days, you still get all the benefits. That’s usually when you’re going to get your teeth cleaned and all the dental work before you leave that benefit package at work. Vacation days seem to be the most common in my office where people are playing around with and taking a look at how many they can take. That is also dependent on an employer, allowing you to take them all in a row and making sure that they’ve got enough coverage with employees. So that one’s a big one.

Those are examples that will play into it. To be honest, I think that it’s mostly going to come down to taxes because everything in my office is all about tax planning.

You want to keep as much in your pocket as possible. You don’t want to give CRA all your money. So aside from the tax and income scenarios that you’re going to have to consider and plan around, there’s another piece of that puzzle – which month actually works best personally for you.

Once you have done those tax and income scenarios, and you’ve got a couple of options and you know the repercussions of them, then it’s truly just picking. What works for you personally? Are you a winter traveler that wants zero responsibilities of having to come back to work in the winter after a hot holiday? In fact, you just want to extend that hot holiday and not come back. If that’s going to be your preference, you’re going to probably want to make sure that you’re done by winter. That’s common in the province that I’m in, we have some brutal winters. You might choose summer. I’m thinking of someone in our office that loves gardening and come late spring and summer and do not want to have to deal with anything to do with work whatsoever. I can’t imagine having to work through the summer – so that was their personal preference.

And then there’s this piece. Is your partner retiring soon as well? Do you just want a couple of months without them at home permanently? Then you choose whatever months ahead of them. So if they’ve already put in and they’ve done their planning and they know when they’re going to retire, you’ve looked at your taxes and you’ve mitigated all that.

I’ve seen in our office when it’s like, “So you’re going to retire in September. Yeah. I’m going in April so that I can at least have a summer alone without you at home.”

It’s super common. I’m not kidding. It’s part of the conversation. I joke in meetings when checking in with new retirees when we’re doing the planning. Is your partner here gonna mess with your mojo? How are we going to deal with that? That’s the exact sentence I use, messing with mojo and everybody gets it. They have to get used to being around each other all the time. It’s about lifestyle and preference as well that is going to play into picking the perfect month.

I’ve also seen family obligations that retirees will plan around and choose the time of year to retire around family weddings, family travel events. Everybody’s doing a family reunion, they’re going to Hawaii and that’s going to actually coincide with their retirement.

And I’ve even seen it around babysitting grandchildren, knowing that daycare’s going to change or mom is going back to work after maternity leave. I’ve seen retiring around that so that grandma and, or grandpa can help with some of the childcare. So this truly is personal and it’s going to be so different for everyone.

The only common theme that I can recommend to you is that you need a financial plan, you have to do the retirement income planning. That includes tax planning around the scenarios. If I retire here, this is what it will look like. It’s really just planning out that year of income tax and into the next year so that nothing is a surprise and you can keep it as much as possible in your own pocket. And then once that’s done, it’s truly just picking the time that works for you.

The most common question I get is, “What is the best month?” And as soon as you do that tax and financial/retirement income planning, it’s going to be totally up to you. And you’re going to have to start thinking about a few of these examples that I gave. I do apologize that there’s not some magic month out there that works. Go to work with your planner and take a look at it. That’s it for today. Any questions? Give me a shout at [email protected] Take care.