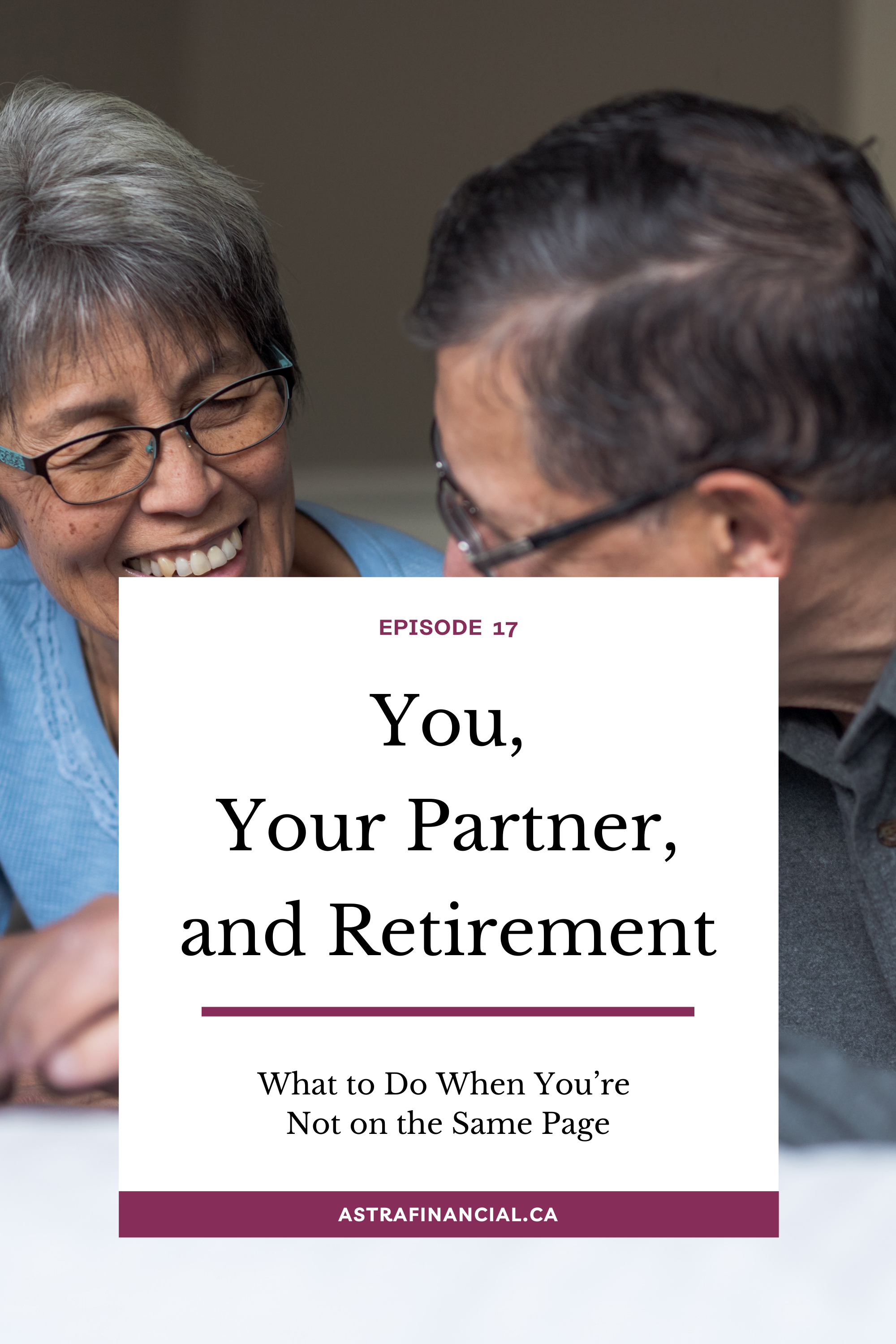 Retirement planning is complicated enough with having to try to navigate discovering your vision. Then there comes the added layer if you are planning with a partner and aligning both of your visions. It’s no surprise that this can trip couples up sometimes when they’re not on the same page. I have seen it with a number of my clients, but the good news is there are ways to figure it out so you get both in sync with one another.

That is what this week’s podcast is all about – what to do when you’re not on the same page. I’m sharing a client story and my advice so you both can have the retirement you’re dreaming of and working together to make it happen.

This is a hot topic. This is a lifelong struggle for some people in their relationships. One of the biggest causes of disputes in relationships is the lack of communication around your differences and values, goals, and habits. When it comes to money, everyone has a unique money history and belief set that can overshadow partnerships and cause disagreements.

I’m going to share with you a story about a couple that I had met. It was quite a few years ago. It was the base of my practice right now, and it was by accident that I stumbled upon it and it has been invaluable. So this couple that I was meeting, they were not agreeing about money at all.

And during one of the financial planning meetings, it kind of got pretty heated and we had to take a time out. He had wanted them to take on more debt, renovate the kitchen and buy a brand new car in the new future. I think he said, within six months they were going to have to replace the car.

She was adamant that they not spend a dime and just continue to save and stash away as much as they could. It was getting pretty hot. This had caused a lot of fights lately and I’d seen it progress. So that’s why I asked each of them to take a timeout from our conversation and share a story with me.

I asked each of them to reflect on their first money memory – the first time they could remember the concept of money. She shared with me a memory of her wearing a hand-me-down dress from a bargain center. She was completely embarrassed. It was her older sister’s dress. She felt as though it was never enough and that her family never had enough money.

I remember this because. I could totally relate to her. And I think I knew where the story was going. I think I knew his story, but I wanted to hear it. He had shared that he took coins from his parents’ dresser. His parents had never said anything or stopped, and they knew that he was taking the coins and he would take them down to the local store and buy candy, gum, baseball cards, or something that he wanted.

They went in-depth on these stories. And when they did, we found that she was coming from a place of scarcity, and his experience and money story memory. His first memory had come from a place of abundance because there was a plentiful supply of money and always enough to buy whatever he desired.

It was then with tears in their eyes that they understood each other’s money memory and why each of them had a different belief. They each understood where the other was coming from. She was completely coming from a place of scarcity and fear and his, of course, that abundance and always thinking there was enough lead with his kind of no fear of risk or debt.

My hair still stands up when I think about that day, because of the connections they each made with their own beliefs from the past. They looked at each other and he grabbed her hands. You could tell there was an honor and respect for each other’s feelings and they asked what they should do.

When they did that, there was a moment of they’re together now in this, there they’re respecting where each person came from. So we made a short-term strategy and of course, we enacted some savings plans. We knew there’d be a structure of the reno or a purchase. We planned it all out.

They were both on board. This is now something in my business that I have as part of an intake form. It’s the money personality, four minutes for new clients. It’s a questionnaire that goes through each person’s money story. Now, of course, it’s not writing a book or a paragraph because everybody would be like, “Yeah, I don’t have time for this.”

It’s some questions and that sparks that conversation. There’s a history and a belief system around money that kind of gets brought up a little bit. We start here, we sit down and get that. If you have a partner, then you can respect your partner and where they’re coming from. It’s just as important as doing this yourself and knowing where your own belief system and history around money comes from.

So that’s one way that you can help guide those disagreements around money. The first place I suggest you start is to do this, share each other’s first memory of money and kind of talk about your money story and where you’re coming from because that’s going to add respect to the conversation with each other.

So now what if a couple isn’t on the same page with retirement planning? The same thing goes, we need to know where each person is coming from and why they’re not on the same page. So if you haven’t done it yet, and you’re starting to disagree about retirement planning…about when someone should retire, how much you think you need, you need to rewind and let’s go back to that first money story.

And it’s gonna bring up whether there’s a scarcity issue or an abundance mindset. It’s just gonna be that first step to help bring you a little bit closer. In 2015 a fidelity study analyzed couples. This study found that almost half of the partners disagreed on the amount needed for retirement and half disagreed on the desired age to retire.

Now I’ve seen this in my practice. It gets sorted out and eventually, everyone is on the same page, but of course, there’s a few bumps to getting there. When we have relationships with our clients, we have numerous conversations and meetings years leading into retirement. So we take the time to hash this out.

This is a step that’s needed to help avoid those disagreements about retirement. It’s about planning for it. That actually avoids the fights. I generally have seen that when there is a disagreement, that the planning we’ve done, the scenarios and the risk management aspect helps.

You should actually have a scenario that shows you if you only get a 3%, if you only get a 4% and all of that. Generally running those scenarios will calm you down by then. Both partners feel prepared and ready. They get to the same place. And so that’s how we bridge the gap. I love asking this is what I ask, people starting to get ready for that retirement.

What is your vision for the most perfect retirement day? I ask each person this. We have a reinspirement workbook that tackles vision and purpose in retirement. It’s important that you share this with your partner. What does the perfect day look like from sunrise to sunset? When you first get up and put your feet on the ground to the end of the day, when you’re going to bed, what does the day bring?

Once you can run through the typical day and have a picture in your head, how it looks and feels, then you can come to some sort of agreement. So your takeaway: talk. Talk and talk some more. The more you can communicate, the more you can avoid the money bombs that happen in relationships.

Another one is having a coach or a planner that’s that third party help navigate the conflicts. So here’s what you can do. Schedule your check-ins. If it’s a once a month Sunday coffee, budget bills, and money, check in and schedule the check-ins with your financial planner.

I’m talking about having someone help support you through the tough conversations and be there for you — that’s your partner and it most definitely is your financial planner. Visit our web page at astrofinancial.ca and download that free retirement vision workbook. I mentioned it’s called a reinspirement workbook. That’s it for now until next week.