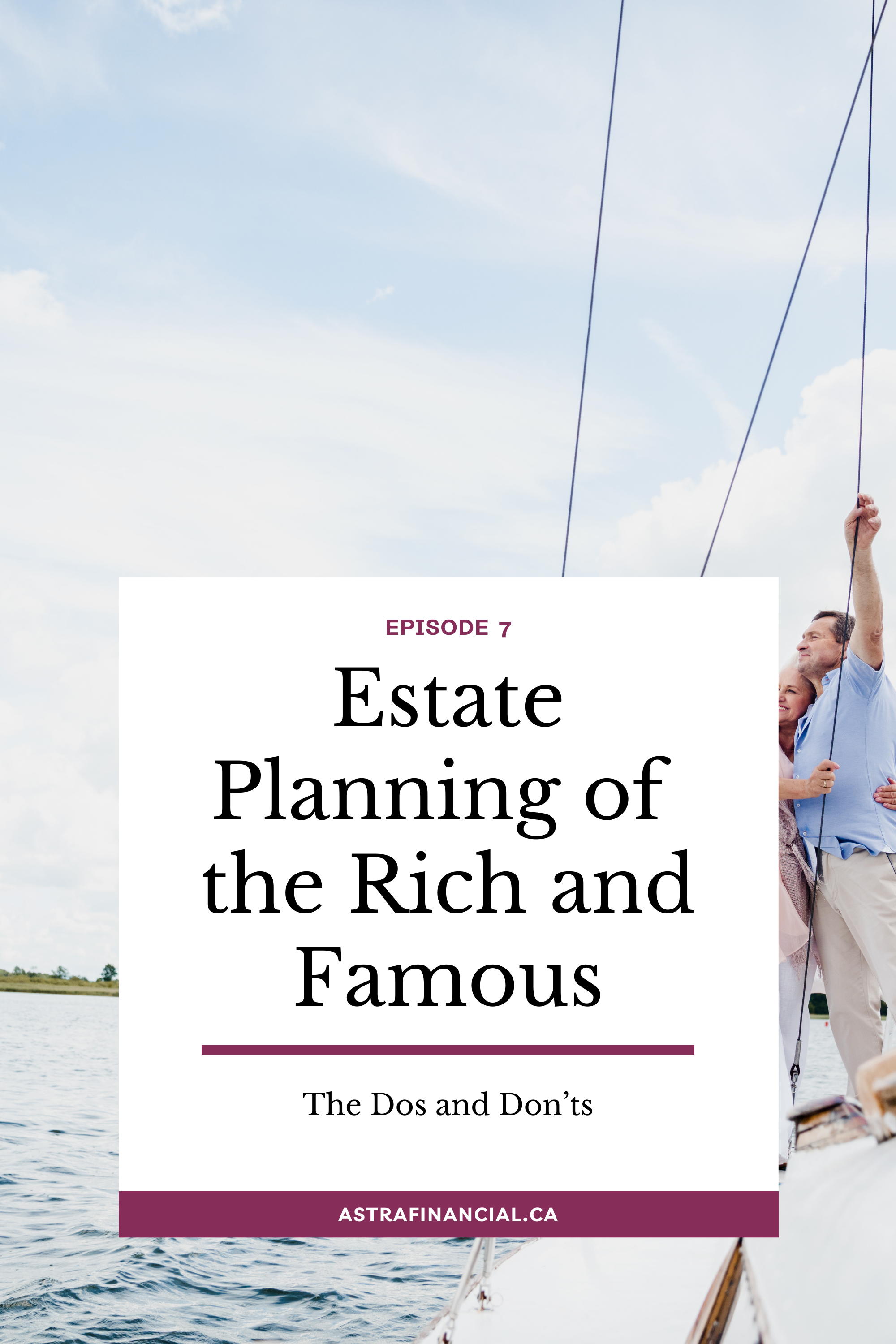 It’s my latest podcast where I dive into the reasons why having your will and estate plans in order and up to date is so important.

I’m going over some well-known celebrity cases that might make you think about your own plans so you know your loved ones will be taken care of and your wishes are fulfilled.

Ultimately, having your estate ducks in a row is a gift to your family. It eliminates any potential complications and it makes life easier for the people you love.

Hello, and welcome back to another round of, “Our Heart Of Money Talks”. I’m glad you’re joining. The title of this episode is, “The Estate Planning of the Rich and Famous”.

Today I’m going to share with you some well-known public estate failures. It’s hard to imagine that some people with the means to give good advice have not planned well or prepared a well thought out will and estate plan.

The tabloids love to jump on the mistakes of celebrities. I’m going to jump on that bandwagon today too, and share a couple of estate mistakes made by two very young famous people.

For the majority of us, estate planning is as easy as having a completed will and power of attorney and ensuring we have beneficiaries designated on our assets.

So think of your RSP’s, your pension, your tax-free savings account. Just putting a beneficiary on there, truly that they’re a will and beneficiaries. That’s the basics of an estate plan. It doesn’t need to be complicated for most of us.

Next week. I want to share some of those simple steps, but leading into that, I wanted to talk today about some of the interesting public and complicated estates out there that have not gone so well.

Let’s look at a simple estate that didn’t account for the beneficiary to pass away so soon. Jim Morrison was the lead singer of the doors from the late sixties and into the seventies.

Jim Morrison died at age 27 in 1971. Now, given his reputation as a rock star, I think it’s surprising that he even had a will.

So bonus points, that’s pretty good considering, many people without wills live a much more stable life than he did. Heck, my husband and I do, and we were way older when we wrote our wills. I think we might’ve been 29 or 30. We couldn’t agree on who to leave the children to if we both died.

So I know it can be a daunting task. Kudos to Jim Morrison. He had a simple two page – pretty good. But the problem is that it didn’t play out the way that maybe he would have wanted.

The will left everything to his girlfriend. That’s 25% interest in the band, and if she did not survive them, then he wanted his siblings to have everything.

Sounds simple, sounds normal, but his girlfriend passed away a few years later, The Doors became popular and you can imagine that leaves a hefty estate. When she passed on a few years later, she didn’t have a will. By default, her parents got everything Jim originally had wanted and intended for siblings to have something.

This was not accomplished and the families fought. So his girlfriend’s family and his family fought for some of the money in the estate. A simple solution would have been for Jim to have created a trust in his will. It would have provided for his girlfriend, but also a contingency that if she passed away, then his siblings could be provided for.

We’re not talking chump change here. This is important stuff. This is where I think it’s important to have help with your will, from someone that has a specialty in estates, it can get complicated really quickly.

If you think of all the what-ifs and it’s a professional that has a specialty in it, it’s not that hard.

If your doctor referred you to a podiatrist, for a head injury, it might not turn out too well — same thing with lawyers. They might have a real estate or corporate law specialty, but they might not do many wills. Just a thought…you need a specialist.

Okay. So another tragedy, a young star Heath Ledger.

He won an Oscar after he passed away for playing The Joker in The Dark Knight. In 2003, Heath Ledger did complete a will in Australia. That’s good news, high five.

He also purchased life insurance for $10 million. That’s perfect. High five again. I’m surprised when young people say they’ve taken the steps, have a will and do all the right things.

His will stated he was a resident of Australia and left half of his estate to his siblings and the other half to his parents. After that will was completed, Heath Ledger and Michelle Williams settled in New York and had a daughter Matilda.

The life insurance policy was for his daughter, but the will had not been updated.

He died in 2008 and questions came up regarding his residency. Was it New York or Australia? And you can imagine a grieving family then also having to go through legal hoops and questions and trying to define and execute a will?

An updated will would have cleared that up. The issue with the residency becomes an attack, question tax question of where the estate and assets would be taxed.

Certain US states that provide for children, even if the will leaves them out —  it all depends on what state you live in. This becomes muddy and unclear when there are residency and tax questions and then if there is a child left out of an old will.

In this case, according to the press, his daughter, Matilda did not fight against Heath Ledger’s estate.

So now to the life insurance part. Remember I said this is good news. He did the right thing. Life insurance is an important part of estate planning. It pays out to the beneficiary tax-free; it’s outside of the will.

It’s a nice little separate piece, and his life insurance was meant for his daughter, Matilda.

Yes, there is an issue here. So again, this starts to get a little bit complicated for Heath Ledger’s estate, even with life insurance. So more potential conflict in this story, Heath Ledger applied for the life insurance policy in 2007, and he passed away of a drug overdose in 2008 that’s only one year after purchasing.

Life insurance policies will not pay out if there’s a suicide within two years. So there’s a question right there that the life insurance company might have question overdose versus suicide. There had only been that one year passed between his purchase of the policy.

Also, he abused many prescriptions, drugs and had died of that overdose. At the time you apply, they ask what medications you are taking. You’re supposed to list them, and they ask you a whole list of health questions. If he’d failed to mention any of them that he was actually taking, the insurance would void the policy and claim misrepresentation.

This is what happened. The life insurance did refuse to pay out the claim. There was a lawsuit on behalf of his daughter Matilda, and they fought that in court. The only thing the press says is that an undisclosed settlement was reached.

I have seen situations where there can be a settlement, even knowing that maybe the person that passed had left some things off the policy. Families fight it and they would get at least something from the life insurance company to just settle it, but generally I have not seen it be the full amount.

So these are just examples of a few things that have gone sideways — not updating a will after a child is born, changing countries of residency, and the risks of not disclosing information on your life insurance policy.

Now, these cases are a little over the top, but we can still learn from these potential disasters. A story I haven’t shared is blended families and stepchildren, and so it takes some thoughtfulness.

Sometimes there’s a complication because when you try and make things fair and even, and you try and think of all the scenarios that might play out with blended families, you have to take your time. Some really good advice from a lawyer and a financial planner can help with that.

Next week, I’ll give you a simple, quick list for your own estate planning, a few things to make sure you’ve covered what you need to cover. Maybe after this podcast might be a good time to just check your will and ask yourself if you need to update anything. It’s a great time to do this.

If you don’t have a will, I suggest we talk. I would love to point you in the right direction, because this is an important piece that you need to complete. It’s a gift to your family. It eliminates any potential complications and it makes life easier for the people we love.

I hope this was helpful. Thanks for listening, and we’ll talk more about this next week. Take care.